Netent, founded in 1996, is a software developer for online casino games. However, their experience with casinos goes much further back than that. Namely, at the time of its founding, Netent was a subsidiary of a large, Swedish, physical casino. Already from the start, this software developer has made it very clear that it was only going to focus on the things it itself likes. All games developed needed to radiate and be innovative. This emphasis on innovation remains, which also is what they are mainly known for. Innovation can clearly be seen when considering the unique features used in their games. When playing a new game by Netent, new players always immediately search for surprising, new features probably not yet offered by Netent’s competition.

NetEnt released some great additions in 2017. In 2017 NetEnt paid out more than €78 milion in Jackpot Wins. The highest paid out on NetEnt Jackpot Slots Mega Fortune, Mega Fortune Dreams, Arabian Nights and Hall of Gods. See the complete NetEnt list for 2017. 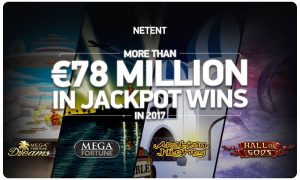 Netent has earned its world fame with some of their best games; even people who have never played online slots know of Starburst. Somewhat-regulars will recognize games like Twin Spin, Gonzo’s Quest, and South Park. Since casinos know a lot of people want to play this Swedish developer’s games, casinos very regularly give out bonuses on Netent’s slots. However, not very many people know that Netent does a lot more than just slots. That is, they also have sports betting, roulette, Live Casino, and Poker. With all this, they cover all aspects of online games, which makes them not only innovative but also versatile.

NetEnt Ranking in the top three

Almost all relevant website proclaim Netent’s place in the top 3 of best software developers for online casinos. Additionally, Netent has already won many prizes, most of which were won on the basis of innovativeness in technique, features, and overall gameplay. Luckily, they do not rest on their laurels. Namely, Netent announces the release of a new game at least one month in advance and does this at least once a month. The goal of this strategy is to get people to talk and speculate about possible new features, thus increasing publicity. One method they use to announce a new game is leaking, or rather, uploading a video of the game to YouTube. Netent also continues to publish new software for sports betting and poker, which you can usually readily play online.