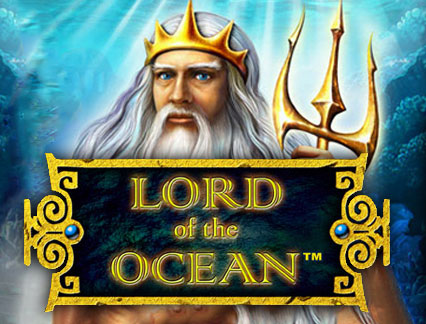 Lord of the Ocean is a slot by Novomatic on which the main focus has been on aesthetics. For example, the standard symbols aren’t actually that standard and a beautifully crafted Poseidon plays a large role in this game. There is no bonus game, but it does have a gamble feature, with which you can gamble hoping for larger wins, and free spins. The slot is utterly standard and plain, making it appealing one for many.

How to play Lord of the Ocean?

Lord of the Ocean is a slot you can start playing almost immediately after having opened it since you won’t have to learn about any complicated features or whatnots. The game doesn’t involve any random features or bonuses, it has a standard layout of five reels and three rows fitted with 10 pay lines, and no surprising elements. The only aspect of this game that could potentially be a surprise is that fact that the game makes use of standard symbols that range from the ten to the Ace. On a slot like this one, Novomatic shouldn’t use this many standard symbols. Unfortunately, the background music and sound effects are of such dreadful quality that you’re advised to be aware of the fact that you can turn off the sound in the top right corner of the screen.

Free spins on Lord of the Ocean 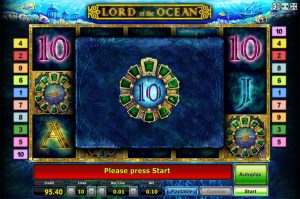 The free spins are the highlight of the Lord of the Ocean slot. During this feature, wins can add up quickly, not in the least because of the expanding wild feature. When you land three amulets, you unlock the free spins mode. Before you can start spinning for free, you first have to select which of the symbol you want to function as the special free spins-wild. Also, the regular, base game-wild still shows itself and works together with the expanding free spins-wild.

So, during free spins, you will have much more and much bigger wins than during the base game because of the two wilds, which includes the expanding wild. And even though the 5×3 playing grid is fitted with only 10 pay lines, with two wild symbols, wins can still amount to handsome monetary gain.

Pay lines on Lord of the Ocean

If you’re somewhat familiar with Novomatic and its work, you will know 10 pay lines are rather common for a standard slot. And just like most other Novovamtic slots, Lord of the Ocean also is fitted with 10 pay lines and you can determine on how many of them you want to play. This, you can do at the bottom of the slot, where you can also configure the bet-per-pay line and, thus, the bet-per-spin.