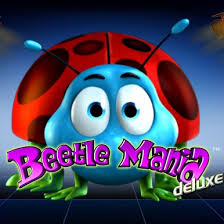 Beetle Mania is a slot by software developer Novomatic and is creative as well as entertaining. The small insects are the high paying symbols in this game and their animations are very much non-standard. The beetles are animated beautifully and give the game some extra zing. Beetle Mania also makes use of a wild symbol and has free spins during which you can win much more than you can during the base game.

How to play Beetle Mania?

Beetle Mania is a slot that uses a simple layout. With its five reels and three rows, the playing grid is nothing but predictable. Also, and justly so, Novomatic has decided to put quite some standard symbols into this game. These standard symbols range from the ten to the Ace and ensure a clear overview, thus providing an opportunity for you to rather clearly see whether a win is created or not. Moreover, if the slot wouldn’t have had any standard symbols, the action on your reels would have been too chaotic. The background and frame of the slot have a 60’s look and might let your mind wander to one or some of the legendary musicians of that time. The scatter symbol in this game is a music note, so that fits right in. The title of the slot also already hints at this dual theme of The Beatles and music from the 60’s. The wasp functions as the wild symbol and can substitute for any other symbol except the scatter. 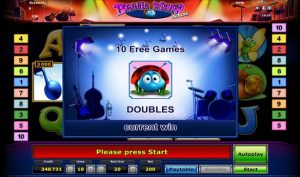 Beetle Mania is equipped with exciting free spins. There won’t be a multiplier present, but Novomatic has thought of something else to make free spins even more fun. In order to unlock free spins, you will need the scatter, the music note, to land on your reels in at least threefold. You will receive 10 free spins and the extra feature that accompanies the free spins.

When you receive a ladybug on the middle reel, you receive all wins previously formed during that free spins mode again. So, all wins that have already formed will get summed and added to your account balance. There is a limit to how much you can win again, however. More specifically, you cannot win more than 100 times your total bet. So, it’s not the coin value but the coin value multiplied by the number of active pay lines. Both the number of active pay lines and the coin value have an influence on how much you can win with this feature.

Beetle Mania is fitted with a rather small number of pay lines: 10. And even though it truly is a rather small number, having to pay attention to just ten pay lines does make things less complicated. So, the final verdict is up to you. If you prefer to play with even fewer pay lines, you can do so on Beetle Mania. You can configure the number of active pay lines at the bottom of the slot. Novomatic does not offer the option of configuring the number of active pay lines by clicking on the possible numbers alongside the playing grid directly.

At the bottom of the slot, you can configure the number of coins per active pay line. To the right of this, you will find the total bet per spin. You can also choose to make use of the autoplay function in this game. The default number of automated spins stands at a comfortable 50, so you can start chilling very easily.