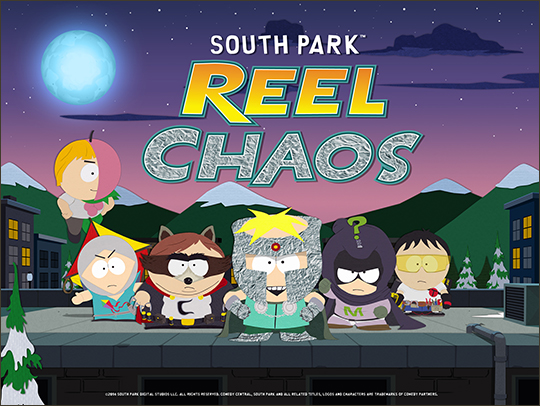 South Park Reel Chaos, sometimes called South Park 2 since it is a prequel to South Park, has an entirely different theme. In South Park Reel Chaos, Butters has turned evil and tries to seize power, and, the four friends try to prevent that from happening! The slot has five reels and three rows, but don’t be fooled by this simple layout as this slot is chock-full of features, random actions, and spectacular extras which can lead to very big wins. If you’re a fan of slots, South Park Reel Chaos is definitely a game for you! 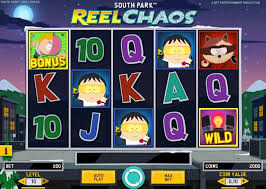 South Park Reel Chaos is very much a complete slot; it has stacked wilds, multipliers, multipliers with re-spins, overlapping wilds, and, of course, a bonus game, which is one that won’t get boring in a hundred years. The slot makes use of standard symbols ranging from the ten to the Ace, and even though you might not like standard symbols in general, they do help with keeping it easy to keep track of what’s going on on your reels. That is, the slot just has too many features to solely use animations and keep things accessible at the same time.

One of the features only gets triggered after an unsuccessful spin; the handyman shows up and starts repairing the slot. After he has finished and the slot starts spinning again, you will actually want the next win to take a while as the multiplier keeps on increasing until that next win. Another feature involves hamsters you have to shoot off the playing grid, after which they will turn into wild symbols. The funnest random feature might just be Eric chasing after Professor Chaos as it is both fun to watch and it leads to entirely wild reels, and that, of course, is great for your winning potential! 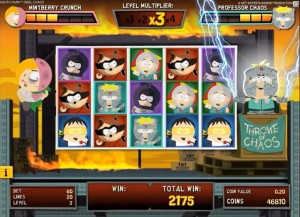 Your health bar is positioned in the top left corner of the screen, while your enemy’s life bar is positioned in the top right corner of the slot. With each spin, one of you wins and one of you loses. If a win forms on your reels, you win and, thus, you get to hit him. However, if the spin proves unfruitful, he wins and you get hit. This is a very fun and creative way of conducting a bonus game and once you defeat Professor Chaos in the top level, you receive an epic bonus!

South Park Reel Chaos makes use of a total of 20 pay lines and that is the precisely right number, as it means that it isn’t too hard to know when a win is forming. The slot is not equipped with a jackpot, but the many potentially lucrative features already are everything you might want from this game. All in all, it is a very entertaining slot that can definitely compete with its predecessor, even though South Park is still more popular. Both slots belong to NetEnt’s best slots, so it seems like the collaboration with South Park Studios, which have provided a lot of materials, has paid off royally.