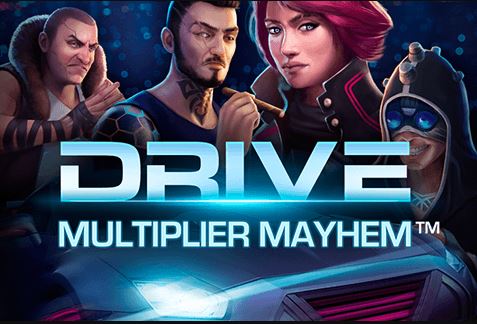 Drive Multiplier Mayhem is an interesting video slot by software developer Net Entertainment. This is one of the scarce slots that do not have a special feature. That is, the non-special features have been made so interesting that they are what makes this slot so good. This game is mainly about the multipliers, which also isn’t surprising, looking at the name of this slot. Drive Multiplier Mayhem has special free spins during which it’s less about spinning and more about outracing your opponent.

How to play Drive Multiplier Mayhem?

Drive Multiplier Mayhem is relatively easy to play. It has five reels and three rows, but they rows and reels aren’t outlined and it looks like they’re floating. The slot makes use of quite some standard symbols which range from the ten to the Ace. Besides the standard symbols, you will find animations that have to do with the racers you have to beat during free spins.

The slot has a wild symbol which can substitute for any other symbol except the scatter. Also, the wild symbols have multipliers attached to them. At the bottom of the slot, you can alter your total wager by altering the level or by altering the coin value. Also at the bottom of the slot, you will find the autoplay function. This function you can use if you don’t feel like constantly pressing the spin button. Drive Multiplier Mayhem can also be played perfectly on handheld devices. What’s more, this game seems to have been produced specifically for mobile use.

When the scatters lands on your reels at least three times, it’s time to race. You will go to another playing grid, one that has nitro symbols. You need three symbols to win the race. If you have more than three nitro symbols, the surplus will be taken into the next race, which means you will be slightly ahead of your opponent. These free spins have been executed beautifully and the fact that you need nitro to race makes it even more interesting. That is, the nitro makes it perfectly clear you’re racing.

Drive Multiplier Mayhem has a total of 15 pay lines and you cannot alter the number of active ones. The reason for this must be the function of the wild. The slot does not have a direct jackpot, but as a result of the wild symbols, the wins are relatively large in this game. The maximum potential win on Drive Multiplier Mayhem stands at a firm 750,000 coins. Even though that’s not a real jackpot, you will win big if you’re playing with a decent wager.